There it was… jutting out of the Pacific Ocean in the haze that settles before the dusk and the fiery July coastal sunsets, Haystack Rock. The icon from the Goonies movie and all those Oregon postcards, that marked the finish line for this 50 mile run. My GPS said we were at mile 48, the end was now in view, and I wanted to quit this now maybe more than any other moment in my life…

Two years ago, I wasn’t a runner. I had ridden my bicycle on tours that taken me along coastlines and over mountain ranges. I had backpacked for weeks on end. But I had probably never run more than 3 miles at any one time in my life. Two years ago, I put forth a challenge to myself, only because the idea seemed completely impossible at the time: I wanted to complete a 50 mile run.

Joe and I, both having a couple 50K’s under our belts, opted to bypass an organized race for our first attempts at a 50 miler, and instead just choose a place that would make for a scenic day spent running. We chose a route that started in Astoria, a town where I had lived for a few years and knew the trails well, and would end in Cannon Beach, following a course that went from steep mountainous switchbacks to hard-packed beach sand to trails where forests collided with the ocean. We also put the word out to the locals to see if anyone wanted to join us. 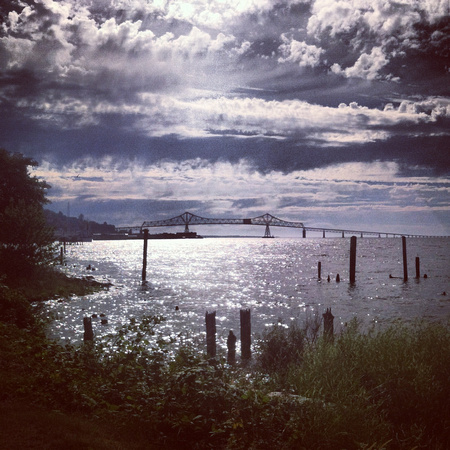 A cool July day, 7am, we made our way to the waterfront and were joined by a couple others who were both attempting their first 50-mile runs as well. In all, there was Joe, Ami, Jason and I. Sometime not long after 7, without a word, the four of us set off at a soft trot along the Columbia River, following the course we had mapped out.

We left the river and began climbing neighborhood streets before hitting a trail that would take us to the highest point of town and the Astoria Column, a viewing platform atop a 164 step spiral staircase with a panoramic view of the region. It was exciting when, without hesitation, everyone went straight for the stairs and began climbing! 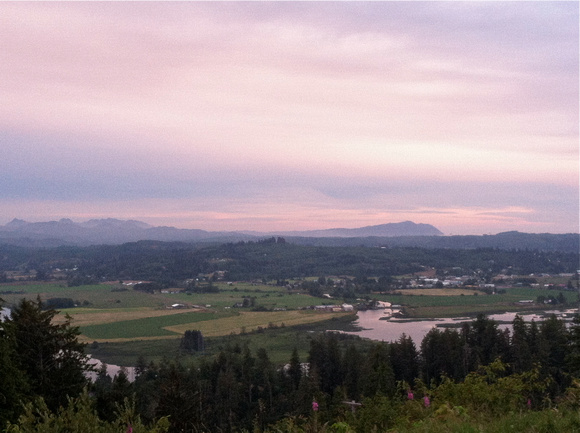 A challenge to run 50 miles. The first race I signed up for was a half-marathon, I did okay for the first 10 miles and had to drag myself the last 3. The next day, I couldn’t walk.  I began running trails around Reno and Tahoe. I would set out on the hardest hikes I could remember, and finish my jaunts beat. I signed up for a marathon, and beat my estimated finish time by an hour. The next day I couldn’t walk.

Our amazingly supportive friend acted as a roving aid station for us. Leap-frogging us in the car so that every dozen miles or so we could take a break, refill our hydration packs, down some calories, and take the weight off our legs for a little bit. By our first break, everyone was feeling great. We had followed quiet rural roads for the last few miles, and for the next few would be going into the forest for a short hard climb followed by a few miles of gentle downhill. We were still laughing and talking at this point. At about mile 16, I just remember having that feeling that this movement felt so natural, that I was just hovering across the land. 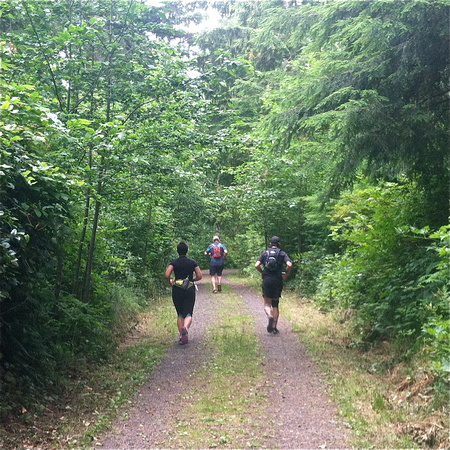 My training runs got harder. I would seek out the hardest trails I could find. Often Reno to Virginia City up dirt roads, and when I got to the bottom, I’d turn around and do it again. Sometimes I spent hours out there and wouldn’t see anyone else aside from the wild horses that wander those mountains or a startled coyote quickly hurrying away from the desolate trail.

We hit the beach at the end of the Fort-To-Sea Trail and Joe wasn’t doing too good. An injury to his IT Band that he had spent the past few months recovering from was causing him to limp. At about mile 18, he decided he didn’t want to push it another 32 miles and undoubtedly make it worse. He dropped. At about mile 25, Ami called it too. We all took a break at the beach, next to a shipwreck whose metal hull sat rusting in the sand. From here on out, it was Jason and me. 25 miles in, we set out at a slow run along the packed sand of the beach.

I signed up for a 50K and finished in the top 3. The next day, I couldn’t walk, but with that finish, it didn’t matter. I sought out the hardest trails I could find to train on. I tried to run from Reno up Mt. Rose overlooking Lake Tahoe, but was turned back when the snow became impassable. I only ran into the most intrepid runners and hikers, and at those distant trails, we simply greeted each other, I was impressed at their distance from any roads or parking areas, and continued on. I would startle bobcats and pause at higher and higher vistas. And I began seriously looking into nutrition for these endurance runs.

Over the next 15 miles, the creaks and pulls of repetitive impact began to appear. A sore knee, a tight ankle, a pained foot. We saw the imposing landmass of Tillamook Head slowly growing as we got closer, becoming noticeably more intimidating as we realized that we were each feeling the fatigue of the past 30+ miles. We passed through the city of Seaside to our final agreed upon resting point near the cove where the shore butts up against Tillamook Head.

I stopped listening to music, and used the long runs to really try to listen to my body. Adjusting my form when something felt off, repeating to myself the advice friends had told me, ‘if you slow down ten percent, you can go thirty percent farther’. I sprinted up hills and used the downhills to sip water and catch my breath. And I made sure to always appreciate the view and the heartbeats pounding in my fingertips. 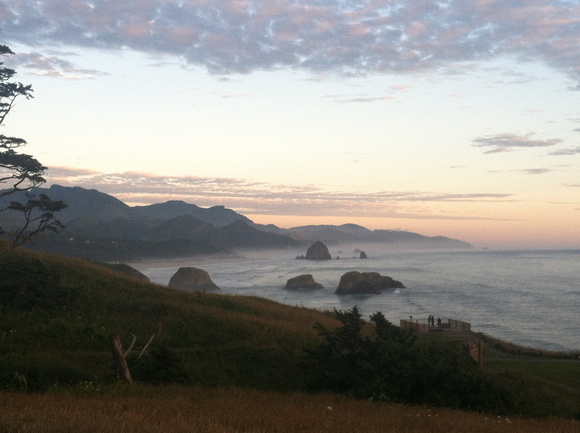 When you’ve already run 40 miles and you’re looking at a trail 10-miler over a forested hill rising 1000 feet above the water, the game goes from being physical to mental. My goal wasn’t to finish, it was to get to the top of the climb, where I would have no other choice but to keep going. Jason kept a speedy hiking pace climbing the muddy trails, I tried to force my legs up the inclines in a running motion. We took short breaks to rest our legs, to massage sore spots, to let the burning in our thighs subside. And then continued on.

My entire body focus was on moving. Eyes would go blurry, pain was pushed aside. At one point I told Jason I was going to run ahead, only to push myself a handful of paces, look back, and see him almost immediately behind me continuing his walking gait. I could only think we must have looked hilarious to others climbing fresh up this trail. When we emerged from the trees and saw the rock stacks along Ecola State Park and Cannon Beach, it was a relief. But we still had to get there.  I could stop here, I thought, knowing I did a respectable 47 miles, and lay down. We ran side-by-side but didn’t speak. My mind was so far beyond rational conversation at this point. But we forced ourselves forward.

I find that I learn the most when far outside of my comfort zone. Going into today, I didn’t know if I was capable of running 50 miles, but knew that the only way to find out was to try. My motivation in life is the idea that life serves the risk-taker. And though I’m still not exactly positive how this run fits into that, I set that challenge for myself 2 years ago. And even when it wasn’t my highest priority or at the forefront of my mind, it was there, and I never forgot that that’s what I was working for. 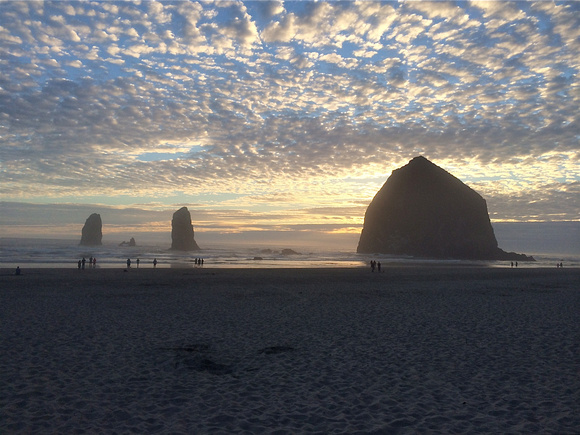 I put on Carly Rae Jepsen’s Kiss album on my phone (which is without question my favorite running music), and Jason and I came out of the forest, onto the quaint shop-lined streets of Cannon Beach as the dinner-crowd on this Summer weekend walked along peering in shop windows, or holding hands. And then we emerged onto the beach as the sun was setting and dozens of groups of people were spread throughout the sand getting their bonfires started. When we made it to the water’s edge, we groaned, knowing that we had to push one final run to our friends in front of Haystack Rock.

Two years ago, I wasn’t a runner. I only knew that 50 miles seemed like an impossible distance. But also that I didn’t want to settle for comfort and the path of least resistance. I wanted what’s impossible. I wanted to know that when it’s all over, I’ll have stories that no one believes. Then I’ll know that I did something right.

Jason and I both fell down into the sand amongst friends and a few gathered strangers, and lied there and the sun went down and the sky went dark. And there was the sound of the waves and the glow of bonfires spread throughout the visible night. Until it got too cold to lay there anymore in my shorts and running shirt. That’s when we got up and began the slow movement toward the car. The accomplishment, the idea of looking at a 50 mile distance and knowing that I had run that, would be indescribable, but that wouldn't come until later. In this moment, I walked with pained steps toward the car, fairly certain that the following morning, I would probably not be able to walk…